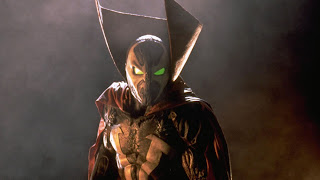 Essential plot rundown:  A CIA agent is betrayed and killed and then comes back from the grave to seek revenge.  This movie was based on the Spawn comic.  And I have not read the comic.  However, I have seen some of the animated series that was on HBO.  But, I digress.

This was an ok film.  It has more going against it then going for it.  The only good thing about the movie was the fact it was about Spawn.  Spawn is a sweet character.  He has cool powers and a bad ass costume.  (See above.  I really liked his costume.  I especially liked whatever they used to make it.  It actually looks like something he would be wearing).  So, naturally, any movie about him is going to have at least some coolness to it.  But, other than being about Spawn, there's not much else going on.

Some people might be offended by the idea behind Spawn.  But, I was offended by the opening (and closing) credits.  They are horrible.  They look like they were taken from some low budget TV show from the early 90s.  They also use this weird green light/smoke combo.  And they use it a lot; to the point of distraction.  Spawn's eyes will randomly glow green and emit smoke.  Or Clown will fart green smoke.  Or  Spawn will get shot and green light and smoke will leek about.  It was way overused and looked kind of dumb.

Speaking of looking dumb, the hell depicted here was atrocious.  It is by far the worse CG I have ever seen.  Every time Spawn descends to the pixelated inferno, it literally looks like he stepped into a video game like Doom or something.  And the Devil/Malebolgia was...I don't even have words.  He looked like Blizzard from the Primal Rage video game.

So, anything and everything that takes place in hell looks horrendous.  There was no depth, no texture, nothing.  Which was odd because all of the rest of the CGI looked pretty decent.  Whether it's the Violator or Spawn's armor, the VFX were good.  (Though, not always consistent).

And the story was not very good.  Nothing really seemed to happen.  After an hour, I checked to see how much time had passed because the story didn't feel like it was going anywhere.  (The movie is only 1 and 1/2 hours long).  It wasn't engaging or compelling.  Even the characters don't seem engage.  When our hero wakes up after being killed, he doesn't seem bothered by it.  Nor does he seem bothered when he makes a pact with the devil.  There are no reactions; he acts like these are normal activities.  And the bad guy's scheme to take over the world was a little confusing and a lot overly complicated.  And there is this old guy who doesn't really do anything.  I imagine he was there only because he was important in the comic.  Spawn also has a pet dog and a homeless kid for a sidekick.  Who does he think he is, Indian Jones?  Also, there is a CIA agent that dresses like this: 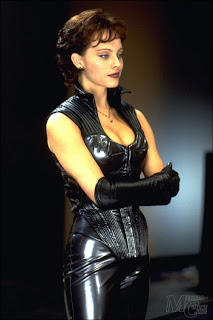 Why?  I don't know.  Presumably because she is a bad guy, so she has to look bad.  Well, if all CIA agents dress like that, I'm going to serve my country.

So, overall it is an ok watch.  The only saving quality is the fact that Spawn is the main character.  Him alone is worth watching.  Everything else isn't really that good.  The worse part is that it's not even bad enough to make fun of.  So, maybe check it out, if you want to?