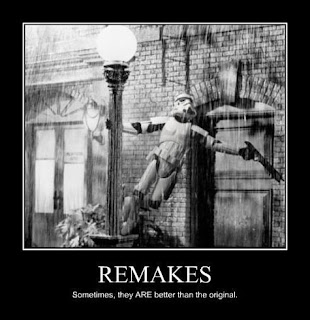 Sequels and remakes are a hot topic among movie goers.  Everywhere I go, people are complaining that there's no originality in Hollywood or how Hollywood is ruining classic movies.  However, I disagree with that and embrace sequels and remakes.

Let's start off with sequels.  The biggest complaint about these is that the story is tightly tied off in the first that there's no story to continue.  When I think of sequels, I always think of Terminator and Terminator 2: Judgement Day.  If I had been alive and old enough to watch Terminator when it came out, I would not have been able to conceive what a sequel would even be about.  The story ties everything together fairly well at the end.  What would happen in a sequel?  (Ok, maybe I wouldn't think that.  And it's been a long time since I've seen it, so I'm not sure exactly what happens in the end).

But, the point I'm trying to make is that, while Terminator was a good movie, Terminator 2 was waay better!  T2 is a sweet movie.  It gives Sarah Connor some great character development and introduces us to the T-1000.  Now, if somebody would have stopped the production because it was a "sequel", then the world would be short one awesome movie.  But, yes, there are sequels that do suck and shouldn't have been made.  However, sometimes what looks good on paper doesn't look good on screen.  So, I generally don't judge sequels until I've seen them, cuz I don't know if it will be the next The Empire Strikes Back or if it will be another Batman and Robin.  If a sequel is good, great, we get more of characters we love.  If it's bad, then don't watch it.

And now remakes.  There is absolutely nothing wrong with remaking a movie (in my opinion) as long as they follow some guidelines.  Well, just one guideline actually:  wait enough time in between the original and the remake so that it introduces  a new audience to the story.  And that's my only criteria.  Here are some good examples of remakes (I'm not talking about the movies themselves, but the fact that they were remade):  War of the Worlds and The Day the Earth Stood Still.  Now the originals were made in the 50s, which was was 50 years before the remakes came out.  That is a good amount of time to wait.  If I had walked down the street when they came out and asked how many people had seen the originals, I would imagine that not a lot had.  I personally hadn't seen them.  I've always wanted to, but never made the effort until the remakes came out.  And that is what a good remakes does:  it uncovers a forgotten film and brings it to new light.  Also, these were SFX heavy movies.  With the advancement of technology, these stories were really brought to life.

When I think of sequels, I think T2, but when I think remakes, I always think of The Thing.  I have not seen all of The Thing From Another World, but I have seen enough clips to get a feel for it.  John Carpenter remade it about 30 years later.  And it is an awesome movie!  The acting, the atmosphere, everything is superb.  But the the most impressive part were the SFX.  The alien in this movie is incredible.  And everything was all done practical (sans CG).

So, a remake can do a few things:  1) It can arouse interest in the original,  2) It can be really good.  3) Or it can suck.  However, there is one thing that a remake can't do:  And that is ruin the original.  I cannot comprehend how people think that a remake can tarnish the original.  If if sucks, does that make the first suck as well?  No, it doesn't.  The only way a remake affects the original is by raising awareness.  Because The Taking of Pelham 123 came out a few years ago, I now know that one from the 70s even exists.  (Though I have not seen either).  There are a lot of popular movies that are, themselves, remakes.  A few are The 10 Commandments, The Departed, and A Bug's Life.

HERE is a list of more classic movies that were remakes.


But that's just my opinion...

Email ThisBlogThis!Share to TwitterShare to FacebookShare to Pinterest
Labels: opinions